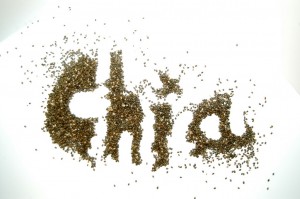 Until recently many people in the UK hadn’t heard of the Chia seeds but with them heralded as the next superfoodare they as amazing as nutritionists say?.

Chia, or Salvia hispanica L, is a member of the mint family from Mexico and South America. The flowering plant can sprout in a matter of days, but chia’s appeal is in the nutritional punch of its tiny seeds.

With more omega-3 fatty acids than salmon, a wealth of antioxidants and minerals, a complete source of protein and more fibre than flax seed, the seeds have been dubbed a “dieter’s dream”, “the running food”, “a miracle”, and “the ultimate super food”, by advocates and athletes.

What’s in 100g of chia? Mind you 100g is an awful lot of seeds !!!! They are tiny a little larger than poppy seeds and weigh next to nothing.

To some the seeds taste utterly bland, but to others there is a slight nutty flavour. It also can seem expensive compared with other seeds and nuts.

In the UK, the seeds are only currently allowed for sale as a bread ingredient (which is the type I am eating) but now the Advisory Committee on Novel Foods and Processes have allowed Chia seeds in a wide variety of products including baked goods, breakfast cereals and nut and seed mixes.

Elsewhere in the world, chia-seed products have been springing up over the past few years. In 2011, 72 new chia products hit the market and 28 new chia foods are already out this year, according to research group Mintel. Compare that with only seven new chia products for all of 2006 and you get a sense of its growing popularity.

The US is particularly infatuated with the seed, introducing 21 new chia items in 2011 and 13 in 2012. It’s in sweets, snack foods, seasonings, yogurt and even baby food.

To chia cheerleaders the seeds do no wrong. They claim chia reduces inflammation, improves heart health, and stabilises blood sugar levels. A few tablespoons are touted as remedying just about anything – without any ill effects. They are easy to add to all foods and are easy to chew and digest making them ideal for the elderly.

In terms of nutritional content, a tablespoon of chia is like a smoothie made from salmon, spinach and human growth hormone according to Christopher McDougall whose bestselling book about an ultra-distance running tribe in Mexico who fuel their epic jaunts with the seeds.