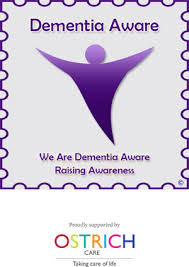 The Telegraph shared that currently less than half of those living with Dementia in the UK are not being diagnosed formally according to the Health Secretary Jeremy Hunt. (Dec 2013)

It is believed that Doctors fear patients would be stigmatised if given a diagnosis, when in reality many people are relieved to get a diagnosis.

If Doctors are not prepared to be up front and open about the disease then how can we expect wider society to have more understanding ?

Dementia is a degenerative brain disease  and should be treated the same way as other life changing condition. This is important for both the person with Dementia and their family.

The stigma surrounding dementia arises from a lack of knowledge of the condition and this is set to change in the future.

The Department of Health estimates that 670,000 people in England are suffering from dementia. However, only 319,000 have been diagnosed, NHS figures show.

Jeremy Hunt continued to say that “In the 1960s people were too scared to talk about cancer,” “In the 1980s the same happened with HIV/Aids. After a long and painful journey, we are now much more open about both and better able to tackle them. We now need to do the same with dementia.”

It is estimated that as many as one in three people will eventually suffer from dementia. Although there is no cure for the condition, Mr Hunt said better management can make life easier for sufferers and save money for the NHS. “It is a truly horrible disease,” he said. “But with early diagnosis and proper help for families living with dementia we can help people live healthily and happily at home for much longer. Let’s talk about dementia and help make it better understood.

I am an Ostrich  Purple Angel Ambassador and my role is to raise awareness in my locality about Dementia. If anyone else would like to become involved please contact me.