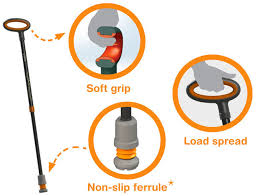 I have loved David Goodwins “Flexyfoot” since I saw it in Boots a while ago. I contacted the company and was kindly sent some “Flexyfoot” walking stick ferrules to send to readers of my newsletter. 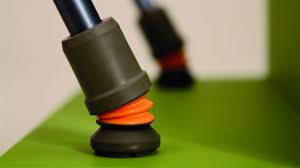 I was delighted to receive an email sharing some wonderful news about how “Flexyfoot” had helped two customers, David Rawlings and  Daphne Rose. ( Rose’s story will be featured shortly) 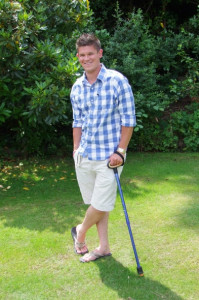 Flexyfoot are obviously delighted to have been part  of David’s story and have kindly allowed me to share it with you.

We challenge you to not to feel inspired after reading David’s story, we really enjoyed his visit to Flexyfoot! Here is the story of his journey from the Army to the world of Aviation…

Andover’s David Rawlins was just your average 21 year old; a fit and active young, life-loving guy, when his role as a British Army Vehicle Mechanic saw him posted to Afghanistan. David was unaware that his tour in Middle East would end under tragic circumstances following an accident that left him with limited use of his right leg.

Following three years of intensive physio, David now 27, has discovered a new lease of life, a great new career and is extremely positive about his outlook for the future. Crediting Flexyfoot with helping to keep him mobile, David dropped into the office to share more about his story with the team. Here’s what he had to say:

FF. David, tell us if you will, about your experience out in Afghanistan:

DR: It sounds funny to say but until the accident, I really enjoyed by time out in Afghanistan. It’s a beautiful country with the most incredible sunsets and in general the local people were really friendly. Initially, I was really busy as a Vehicle Mechanic with REME (Royal Electrical and Mechanical Engineers); some of the vehicles weren’t as reliable as they perhaps needed to be and it quickly followed suit that these were upgraded, leaving me with fewer vehicles to repair. Good really given the nature of the beast but it meant I was re-rolled within the squadron doing more operational work and getting time to mingle with the locals. For me, it was a better experience being out on the ground than it was being within Camp Bastion all of the time.

During this posting, two months before my tour was scheduled to end and I was due to come home, we were on patrol in, a built up area of increased danger, where we were more likely to run into hostility, when the ‘Jackal’we were travelling in ran into a ditch and rolled three or four times. Thankfully everybody else in the vehicle was uninjured and came away with a few scrapes and scratches but I’d been sitting on the top roll bars after giving up my seat to allow the new team taking over to get ground orientation consequently ended up trapped underneath the 7.5 tonne vehicle.

It was dark and dust had been kicked up by the accident so visibility was really poor but I knew I just had to get myself out of there. A fallen truck is a target and so getting to relative safety was the only thing going through my mind at that point. Eventually, I managed to get myself out and a medic came to my aid immediately. I was quickly helicoptered out to Camp Bastion medical Centre were I underwent treatment. I was lucky really. The situation could have been a whole lot worse if we had come under contact something that I don’t like to think about.

FF. So was that the end of your time in Afghanistan?

Pretty much. Although the equipment at Camp Bastion was excellent, they needed further scans to diagnose my injury and so quite quickly I was flown home to the now Queen Elizabeth Hospital Birmingham. This all happened in rather a blur but the military was excellent at arranging for my parents to get up to me, organizing their accommodation and sending my equipment back to the UK.

As it turned out, I’d damaged my right hip quite significantly; the ball had punched   through the socket and I needed a bone graft. Despite the graft, further scans showed that the nerves around my hip joint had died off, meaning the primary muscle needed to utilise my leg for walking and mobility was severely compromised and, unfortunately, would likely deteriorate further over time.

I was obviously pretty cut up about it but doctors told me to start using a walking aid immediately to maximize the relative mobility I had and make the most of it whilst I was still young and fit. From there, I spent three years in rehab, attending weekly sessions at Headley Court.

FF: It sounds like you went through a really tough time. How are things in your life going now?

DR: During the three years in and out of Headley Court, I was determined that I didn’t want those years of my life to pass me by. I was living at home with my parents on military sick leave and it was tough. It was during this time though that I discovered the ‘Battle Back’arm of the ‘Help for Heroes’charity via Headley. They provide opportunities and funding for ex-servicemen to get back into work and help them back into life. I had the opportunity to train to be a pilot and it was too good of an opportunity to miss.

I started at Aerobility where I trained and volunteered until 2012, just after the London Olympics finished. I credit them for absolutely opening the doors to my ‘new life’; I was there first thing in the morning and last thing at night, and absolutely loved it. Now, I’m qualified as a fully licensed private pilot.

Aerobility has a fully adapted aircraft to allow people with a whole range of disabilities to experience flying. Having said that, there are still misconceptions about people with disabilities piloting; I had to take several medical flight tests before I was issued my license. As a pilot, you are just a voice on the radio. People can’t and don’t make assumptions about you, which is why I really like it. Life deals you with a pack of cards, you have to make the best out of your hand.

I was asked by a college along with my colleagues to talk to the young adults about my experiences; to inspire them to achieve more and have a positive outlook on life. I still miss the army, although I stay in touch with everyone regularly. It’s fantastic social camaraderie and I have no regrets about my time there, despite the resultant injury.

I now work for Gama Aviation, on a shift pattern, managing flight planning and the running of the Scottish Air Ambulance. I officially left the army in September 2012 and went straight to work at Gama. The transition was really easy due to my voluntary work at Aerobility.

DR: The physio was obviously long and intense and it gave me the best chance I had maximising what mobility I had left; when I was at the Mobility Roadshow in Peterborough, I came across Flexyfoot and thought ‘why isn’t everyone using these?!’. It’s really helped with my mobility and keeping me active, particularly the stability and huge reduction of pain through my shoulder. Previously, after a long day on my feet, I’d need to ice my shoulder through the evening. That’s never a problem now with Flexyfoot.

Generally, standard NHS sticks are perceived as being for old people and as a twenty-something year old, it was never for me. Flexyfoot’s design is young and funky. Like your’s truly, obviously…On the whole, I’m managing really well. I’ve got a lot of my independence back and Flexyfoot’s helped with that. My positive mindset has obviously been a massive factor in that too.

FF. We’re really pleased that Flexyfoot has been able to help you in your journey…

DR. It really has. It’s a life-changer and has done wonders for my confidence, especially when walking into a shop out of the rain, it grips perfectly. I can walk up grassy slopes and have absolute trust that it will hold out, while other people are digging their sticks into the ground and yanking themselves up hills !I’m always getting stopped by people to ask where it’s from.

I’m still on my journey but my experience has definitely given me a different outlook on life. I’m hoping I can train as in instructor to teach people with disabilities how to fly. Ideally, I’d volunteer to do this in between flying commercial airlines, which I hope will be the next step for me in terms of piloting. My main goal for every step is to ensure that I’m enjoying myself and making the most of life. It can all change in a split second.

I for one would like to congratulate David on his positive attitude and gutsy determination. Well done David.