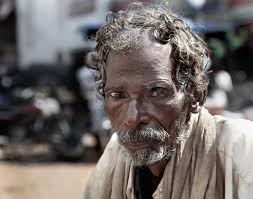 Be grateful for what we do have.

(My second article for the Huffington Post. Shared here first. Please let me know your thoughts.)

A recent visit to Goa has certainly given me food for thought, albeit temporarily at the very least.

When I started blogging I considered myself to be a reporter. I shared relevant information and advice with people who are caring for the elderly and loved ones. Over the course of time, as my social media following grew, I became aware of a crumbling system.

I didn’t become aware, as Government advisors and health experts do, from their detached offices, I became aware, from my own personal experiences of working with the elderly in the community for over twenty years. I have seen failings in the social care system in so many ways, in care homes, in hospitals and in elderly people’s own homes.

What has probably drummed these failings home even more so are the numerous accounts of failings people have shared with me on social media. I know too much. No one would ever now employ me in a social care role, the system is endemically flawed and whether you pay full whack or are funded by the local authority, no-one is guaranteed the good standard of care the elderly need.

I have seen failings in the social care system in so many ways, in care homes, in hospitals and in elderly people’s own homes. What has probably drummed these failings home even more so are the numerous accounts of failings people have shared with me on social media.

That was what really started to concern me. I had always believed that you “got what yo paid for”. Not always the case. People share with me the failings of some of the major players in the care market and we have a right to be fearful of our care in the future.

Carers, struggling with navigating the complexities of the care system, exhausted emotionally and physically. Elderly people being left to starve in care homes, elderly people being left in their own urine and faeces, horror stories of poor care and abuse, I became angry. I was angry and frustrated at the system for failing so many and repeatedly getting away with it…….but there was a system.

Is it worse to have a system that fails or to have no system at all? India has no system, the elderly do literally beg on the streets. Standing or sitting on the pavement with dark, saddened eyes and an outstretched hand. Sleeping rough with no cover, it’s heartbreaking to see, yet rich tourists turn a blind eye, giving nothing to appease the suffering.

I saw an elderly woman sorting through rubbish in the hope of finding something of value either materialistically or nutritionally. Tragic, public, and wholly unacceptable to a Westerner like me who campaigns with passion, for better care for our elderly.

On the whole, a failing system has to be better than no system – doesn’t it?