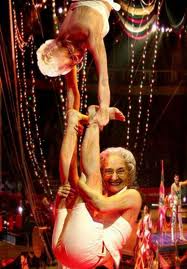 I know an 87 year-old who is having a passionate sexual relationship with a neighbour 15 years her junior. She doesn’t feel old, she feels amazing! However, I also know of a 60 year-old with ME – at times he feels older than 87.

So what is old? Is it a number or situation?

The definition of old according to the Oxford Dictionary is, “Having lived for a long time; no longer young”. I feel there is space for debate. Surely someone who has simply lived for many years may be young in both body and spirit still.

The ‘Older People in the Media Awards’ praise and recognise those who champion older people in society and challenge stereotypes. John Sergeant, Chair of Judges at the Awards this year said “Older people are not simply part of a homogenous group”.

Should we use the word ‘old’ or is it derogatory to people who have lived many years? Children often fear the elderly due to some stereotypes that portray them as being bad or evil, for example “the evil old witch” and “the dirty old man”. Is this not merely an example of the ageism that is so rife in our culture – the same ageism that sees being elderly or old as a burden, and problematic rather than wisdom to be respected?

Should we replace ‘old’ with ‘senior citizen’ – senior means superior…….surely? I have looked up the online Oxford Dictionary’s definition of ‘senior citizen’. The advert at the top of the web page was for funeral services! Was this sheer chance or because my last search was for ‘old’?

Is that it? Should we not use ‘old’ because it means loss of functionality and ultimately, the definitive end of life?

A senior citizen’ is defined as “an elderly person, especially one who is retired and living on a pension”. Once again, the definition makes no reference to wisdom, knowledge, skills, experience – merely the hint of suggestion that senior citizens are no longer useful to the workplace and wider society. Did you know Hitler was responsible for retirement? He felt threatened by mature members of his cabinet and insisted they stopped working.

So, how old is old in numbers? Government researchers interviewed  just over 2 thousand Britons and discovered the age considered to be ‘old’ was a precise 59 years, 2 months and 2 days! If that is the case then why is Saga – the only subscription magazine for the over-50s championing music festivals, pop concerts and trendy clothes? Should they not be focussing on the theoretically miserable decline we will inevitably  find ourselves in and advertise Tena incontinence pads, stair lifts and mobility scooters (and don’t forget the funeral plans and “no medical needed – whole of life insurance cover”!).

To me age is not a number, Old is loss, with the only thing gained being pain. When you lose mobility, memory, energy, enthusiasm …independence. If you still have this at 90 you are still young.

I therefore congratulate the people who have lived for a long time (the definition of old) and who still continue to amaze me with their energy, passion and love of life.  The 87 year-old still making love, the 97 year-old who does his food shop online each week and his 90 year-old wife who uses the kitchen surface to do her bench presses, Lynne Ruth Miller – the 75 year-old stand-up comic and stripper, and the 97 year-old who got her driving licence back so she could take her neighbour to the shops and the 90 year old I saw text her relative the Doctors diagnosis! I hope when I am OLD, I am just like you . Amazing.