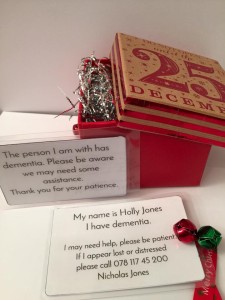 A few months ago  a message was posted on Facebook asking whether anyone could make a card to help people with dementia. Several people responded, offering to make a standardised card such as the business cards available from Vista Print.

I had bigger plans. This idea was not new or unique but was one I had when I started blogging 3 years ago. Blogging is a friendly pastime and we chat online with like minded people. I had been following another eldercare blog called “When they get Older” who have a free to download PDF “in case of emergency card”. I contacted them in 2013 and suggested working together to make one that could be edited on line but nothing came of it as none of us had the tech skills to do this.

I recently stumbled upon an ICE card that could be edited on line and downloaded free. I tracked down the creator of the card asked him if he would work with me to create the Dementia Assistance Card. After he had looked into my work and realised I was a genuine person he agreed.

I am a home help and blogger in Devon and my programmer Dima Tsvetkov is in Finland. We have only emailed or messaged on Facebook but the journey has been fun,exciting and very genuine for both of us. I  created the basic prototype for the card using Canva and Dima reproducing it with code. The card is fully editable and also available as a blank. It is also available in 11 languages with new ones being added by translators, free of charge, daily. This truly is an amazing project to be involved with.

After a week the card was ready to be launched and the marketing began.Twitter, twitter and more twitter and some Facebook for good measure and the card started to be downloaded.

Little over 2 months later there have been over 2500 downloads of the Dementia assistance card and over 300 of the newly  added Companions card. The cards also caught the eye of Bromme Hampton Cole the CEO of Hampton Hoerter Cole and the owner of the Care Expo in China. He is one of the most respected thought leaders for the global health and aged care-industries.On the back of these cards is proudly sponsored by Hampton Hoerter Cole and Caron Cares. How proud am I?

He loved the card and has had it translated into Chinese and kept as a blank so people can fill it in. Not quite how it was designed to be but the internet is still distrusted by many in China and not available to all. This way the very many elderly people in China will be able to have access to them and they will help to prevent people never being found if they wander off as in the case of Xiu Yu seen here. One day she just vanished into the crowds of Shanghai never to be seen again. 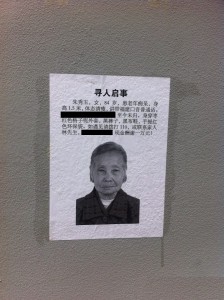 They have also caught the eye of the BBC Health correspondent for the South West where I live and as a result I am spoke about the cards on both TV and Radio on Tuesday!

The card also made it onto the NHS fabulous stuff website and was warmly welcomed there. There is also a link to the story behind the card Lilys story and a poster explaining about the card, which kind helpers print and display.

The only card someone with dementia will need this Christmas….. the perfect free stocking fillers. Make some for someone you care about here.