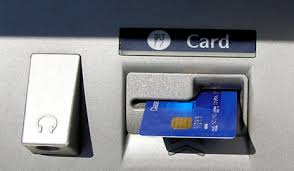 I am going to have to have a closer look into this as to date I was unaware this amazing service was available.

The RNIB have been working hard with High Street Banks and ATM companies as a whole to ensure people with sight loss are still able to confidently use them. There are currently 10,000 talking cash machines across the UK with Lloyds, Barclays, Halifax, Sainsburys, Nationwide, Santander and TSB offering them at most branches.

The disappointing news is however, that both HSBC and RBS/NatWest banks have been delayed in rolling out the talking ATMs. The RNIB have assured that they are working with both banks to make sure that talking ATMs are introduced as soon as possible. For both banks, it appears that they will introduce their accessible ATMs during 2017.
Barclays, Nationwide and PayPoint
In better talking ATM news, both Barclays and Nationwide now have 98% of their ATMs talking. PayPoint, who provide ATMs to convenience stores, has managed to make just over half of their 4000 ATMs talk.

All that is needed to make use of this helpful service is a pair of standard earphones. To find your closest talking ATM by Town or postcode check here. It does appear that my own Building Society is amongst those offering this service and yet I was totally unaware. I do wish companies would make such information available to all. So often, I find there is help available but no-one is aware of it.