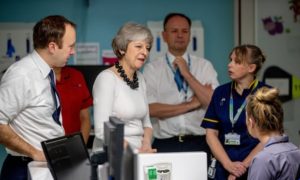 Theresa May has said the government’s long-term plan for the NHS in England will secure its future for generations to come, as critics claimed the proposals were undeliverable in the light of a big staffing shortfall.

Launching the long-awaited 10-year blueprint at Alder Hey children’s hospital, in Liverpool, on Monday, which will set out how the NHS in England will spend the £20.5bn budget increase the prime minister has promised, May said taking a long-term view would transform healthcare.

NHS staffing crisis could harm plan to save half a million lives.

Many of the details, including developments in genomics, hi-tech surgery and artificial intelligence to help save hundreds of thousands more lives, had been trailed in advance. May used her speech instead to portray the overall package of measures as a gamechanger for the health service.

“We are taking a big step to secure the future of the NHS for our children and their children,” she said. “Delivered effectively, our long-term plan for the NHS will secure the health service for generations to come … This is a historic moment. Our vision is clear, our commitment is assured, so let’s deliver the NHS of the future.”

The prime minister said she had made the NHS her No 1 priority as this was what the public wanted. Speaking before May, Simon Stevens, the chief executive of NHS England, said the plan was ambitious.

He said some of the changes would be implemented quickly, including new genetic tests for children with cancer this year, appointments to see GPs online, radical reforms to reduce 30m outpatient appointments, and guaranteed support for older people at home and in the community.

In the longer term, the plan envisages halving maternity-related deaths by 2025, tackling health inequalities and increasing the proportion of people getting an early cancer diagnosis, increasing their survival prospects, from a half to three-quarters over the next decade. Stevens said the measures, which would also target other major killers such as stroke and heart attacks, would create an “NHS fit for the future for the next decade”.

He said previously neglected areas such as mental health, learning disabilities and autism would also be addressed, “services that for too long have been squeezed from the national debate and unsupported by the NHS”

While its vision has been broadly welcomed, questions have been asked about how the plan will be delivered, particularly in the light of the ongoing staffing crisis.

Chris Hopson, the chief executive of NHS Providers, said: “This plan cannot be delivered whilst trusts still have 100,000 workforce vacancies. We need urgent action to solve what trust leaders currently describe as their biggest problem. It’s a major concern that we will have to wait longer to get the comprehensive plan that is needed here.”

His comments were echoed by Richard Murray, the chief executive of the King’s Fund, who said a number of questions remained unanswered. “While NHS leaders have done what was asked of them within the constraints of the funding settlement provided by the government, some significant pieces of the jigsaw are still missing. A number of decisions – notably on hospital waiting times – have been postponed, indicating that trade-offs and difficult choices lie ahead.

“Whether the plan can be delivered relies critically on tackling workforce shortages. While the plan recognises this, commitments to increase international recruitment depend on decisions about immigration policy and we will need to wait for solutions until a new workforce plan is published later this year.”

Both May and Stevens were at pains to stress that staff were at the heart of the plan. Stevens said the majority of the £20.5bn pledged by the government for the first five years of the plan would be spent on current and future staffing.

The prime minister repeated her disputed claim that the £20.5bn cash injection had been made possible partly because of the “vast amounts” that would be saved by Britain leaving the EU.