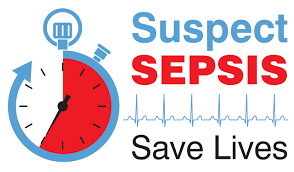 In my four years here this is the first time I will have covered sepsis. Such a vital subject, I wonder how on earth I could have overlooked it. Just weeks ago one of my home help ladies nearly lost her life to the condition so better late than never to share this.

Please read this fully as one day it may save a life.

Also known as blood poisoning or septicaemia, Sepsis is a potentially life-threatening infection triggered condition, causing the immune system to go into overdrive. This overdrive situation causes a reduction in blood supply to vital organs such as the kidneys, brain and heart and as such without rapid diagnosis and treatment can be fatal.

What are the symptoms of Sepsis?

Early symptoms may include:

In some cases the symptoms mimic flu which is why it is essential to double check in vulnerable people most at risk of sepsis, the very old and very young.

More severe sepsis symptoms include a drop blood pressure to drop to a dangerously low level causing dizzy or faintness, confusion or disorientation, diarrhoea, nausea and vomit. Other symptoms of Septic shock include:

When to seek medical advice.

Contact the GP immediately or call NHS 111 on 111 if someone elderly has recently had an infection or injury as has any of the above symptoms however mild.

If sepsis is suspected, the person would usually be referred to hospital for further diagnosis and treatment.

Severe sepsis and septic shock are medical emergencies. Call 999 and ask for an ambulance.

See your GP immediately or call NHS 111 if you’ve recently had an infection or injury and you have possible early signs of sepsis.

If sepsis is suspected, you’ll usually be referred to hospital for further diagnosis and treatment.

Severe sepsis and septic shock are medical emergencies. If you think that you or someone in your care has one of these conditions, call 999 and ask for an ambulance.

How is sepsis diagnosed?

Sepsis is often diagnosed based on simple measurements such as your temperature, heart rate and breathing rate, and may require a simple blood test.

Other tests that can help to determine the type of infection, where it’s located and which body functions have been affected include:

How sepsis is treated

If sepsis is detected early and hasn’t yet affected vital organs, it may be possible to treat the infection at home with antibiotics. Most people who have sepsis detected at this stage make a full recovery.

Due to problems with vital organs, people with severe sepsis are likely to be very ill and the condition can be fatal. However, if identified and treated quickly, sepsis is treatable, and in most cases leads to a full recovery with no lasting problems.