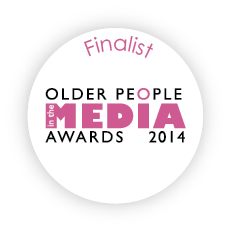 Why the media should challenge stereotypes of elderly care

When I first shared this  article in 2012 when I very first started Caron Cares little did I know that in 2014 my work would be recognised in helping to play a part in challenging sterotypes of what it is to be elderly and the care they receive. When I was learning to blog, little did I realise I was starting on a “media” journey, never for one second thinking of myself as a writer!

Nothing is going to change overnight. I can honestly say it is going to take time and a lot of positive hard work to change the stereotypes of not only elderly care but the issue of being an elderly person.

The media must drive awareness to the positive aspects of care, and there are many. It’s just these don’t make the press or TV programmes. If we are going to change the way people feel about it the media, myself included need to share more of the positives and less negatives.

News correspondent John Simpson went to live with housebound pensioner Peggy as part of the BBC’s When I’m 65 series.
A four-letter word beginning with C ? Care
For some, the word itself conjures up images of wipe-clean seats, tell-tale smells, misery, reliance on others and downward spiral. Grim but hardly a surprise that this is what most of the general public associate with care, and in particular care in later life, when you look at how it is covered by the media. Forster communications conducted an audit of recent media coverage of care  in 2012 – with depressing results.

Column metres – not inches – were devoted to the presenters of the BBC’s When I’m 65 season, saying: “I’d rather take my own life than face illness in old age”, or “I don’t think it’s too over-dramatic to say that I think care homes, by and large, are prisons that people are sent to as a punishment for being old”, and that the prospect of moving into a care home fills them with “enormous dread”.

Look beyond this recent run of stories and you’re faced with coverage from the last six months revolving around scandal, failures, underfunding, lack of dignity and unnecessary death. The papers remind us about the fragility of the financial situation – questioning how on earth Great Britain PLC can foot the growing care bill. Nothing has changed.

Does all this reflect the reality? For some yes, but certainly not all. There are also positive stories to be told by those providing and receiving care. So, how can we encourage the media and the general public to think differently about care and all it entails?

It’s not easy – but it’s certainly not impossible.

Organisations working in this area must use their communications to re frame care so it isn’t seen as a life sentence. Encouraging the public to look beyond the grim stories and asking them to take a more balanced approach is essential. More voices must join this debate, highlighting the opportunity to prepare for a better end of life and fostering better understanding of the financial responsibilities involved and what assistance is available.

For my part, I have created a Good Care page where people can praise those carers and health professionals who have provided good care standards.