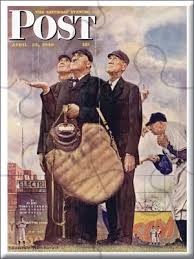 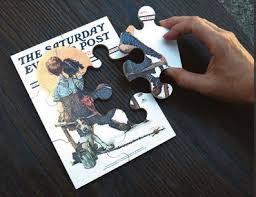 Karen Miller developed Memory Jogging Puzzles and Matching Games in 2008 and with Christmas not that far off I  thought it would be timely to share this.

Karen said “My mother suffered strokes and Dementia, observing her struggles and learning nothing had changed since her death in 1994.

Since that time, I have been dedicated to helping others… who don’t enjoy putting children’s puzzles together or puzzles with too many small pieces. Memory Jogging Puzzles are “A fun moment in Time”.

These fun brain games of easy puzzles have been proven to stimulate cognitive or problem solving skills, awaken memories and emotions. Plus, encourage participation and conversation. 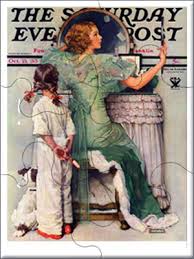 As I laid a 6 piece puzzle in front of Mary, I asked if she wanted to work on it. She nodded… yes. Slowly, I separated the puzzle, laying pieces within her reach. She eagerly picked up one piece, then another, turning and closely observing, each knob.

Mary knew the pieces went together, she held them in her hands, adjusting each knob on it’s edge, then flat, intensely, testing each opening.

After a bit, I tapped on the table saying it would be easier here and the pieces will stay together. She obediently put the pieces on the table and tried earnestly to find two that went together. (I didn’t rush her, I was pulled into her time).

Discovering a piece she liked, twisted and turned it, measuring each knob, her search began. Her fingers moved slowly over the pieces, feeling their curves before they made their way into the puzzle.

Mary like many others, tried to force pieces into place. Sometimes she would have the right piece, but could not make it fit because it was on top of another. (this is common)

When this happened, I would slowly guide the piece into place, saying, it fits perfect. (When possible I gently guided with one finger… just a little nudge and it falls into place, showing her, you don’t have to force it, which many do)

Upon completion. You did a good job Mary! And she pointed for another puzzle. As Mary started her 2nd puzzle, I moved across the table to observe her from a distance.

This time, she took the puzzle apart, laid pieces around, just as I did and then began her routine.

Picking up one piece, observing every curve, randomly pick up another, testing the knobs in open areas searching for that right fit.

This process was done in her hands not on the table. (I was thinking later, perhaps she needed to get the pieces closer to see them clearly OR maybe she just wanted to)

She was extremely focused, not hurried, when she felt the pieces in her hands were correct, she would put them into the pieces on the table.

Every once in a while she looked up at me, not saying anything, but her eyes told me, she wanted my help and her hands were stalled in place on the puzzle.

Each time, piece(s) were correct, sometimes the angle was off, or the piece on top of another and she could not get it to fit, but she was never frustrated or anxious.

Each time she completed a puzzle, good job, it is perfect. You are great with puzzles!

Immediately, she reached for another puzzle, and we would go through the process again. It took Mary about 7-10 minutes to put 6 piece puzzle together. I don’t know if she was faster at the end of our session, but her touch became softer and smoother placing the chunky pieces down and into place.

I could actually see a visual change in her hands while placing pieces down, more relaxed. She handled the wooden puzzles great and she was amazing. On automatic, very intense, full concentration, never taking her eyes off the puzzle or pieces… except, when she looked up at me.

After she completed all of the themes I had with me (7), I asked if she had a favourite puzzle. Not responding right away, I thought perhaps she didn’t understand or hear me, THEN, she picked one up and said “this one”. (Title: Going Out)

I had been with Mary an hour, heard nothing, no facial expression, her eyes were her voice, this was amazing to me, hearing her voice and making her choice.

This is rather difficult, the chunky wooden puzzles hung together making it possible. She usually had the right pieces and knew where to put them. If she couldn’t put them into place, she would look up, this was my cue.

After several puzzles it appeared she was studying the picture more, by gliding her finger on the top surface of the knobs. Mary would have continued all day, non stop, even though she was silent. Expressing only by her actions and pointing, wanting to do more.

She was experiencing success and I was in awe, observing her amazing way of looking and working with the puzzles. I was impressed with Mary’s intense focus, nothing distracted her; she was enjoying what she was doing, even though she was silent.

Bingo was being played in the same room, I kept asking if she wanted to stop and play bingo. She shook her head no and pointed to another puzzle.

Doctors say that old habits are buried in our memories, this is one reason puzzles are beneficial exercises for Alzheimer’s and Dementia patients.