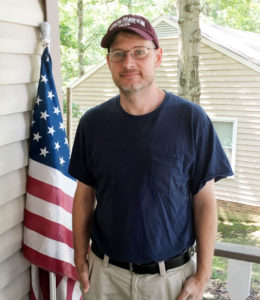 Meet Steve. Steve is 46 and he has dementia.

Often when I make the dementia assistance cards for people I don’t know anything about them. I have just made some cards for Steve and this is his story.

Much of a great chef’s skill is stored in muscle memory; in the ability to consistently perform multiple tasks without pondering each step.

But for Steve Drake, something was interrupting the flow.

Maybe it was the stress of worrying about his son, Chris, deployed with the U.S. Army in Afghanistan.

Maybe he was just extra-tired. Maybe a break from the fast-paced world of restaurant kitchens would help him recharge.

Drake switched jobs, leaving the Belvedere Inn, where he’d been executive chef for a decade, and took a job that was less stressful.

But tasks kept slipping his mind, Drake says. He was dropping things. By 2014, working anywhere, in any kitchen, was becoming an insurmountable struggle. On one occasion, Steve had trouble giving a friend driving him home directions to get there.

There were changes in what he was interested in, says his wife, Jannette Gotwals. He wouldn’t be able to settle himself, and she’d find him wandering in the middle of the night.

WHAT IS EARLY-ONSET ALZHEIMER’S?

Still, he says, even though nothing was improving, there were enough good days scattered here and there that they could push deeper worries back down, overlook them and excuse the lapses. Without any answers, they pressed on as best they could. For three years, they struggled and wondered.

In the midst of the confusion, Gotwals says, “I was at church taking a class on counseling. One day there was a session on how to counsel people with Alzheimer’s. And I thought, ‘This is my husband.’ ”

But how could that be? Drake was 45, hardly the typical age for a person to develop the memory, thinking and behavior problems associated with Alzheimer’s.

Then, one day at work, overwhelmed and depressed, forgetting tasks and dropping things, Drake had had enough. He left work and went to the hospital.

And they got news that would pull the foundation from the carefully balanced life he and his wife had built in Pequea, where they raised their son and his sister, Alex.

“After he had his first MRI,” Gotwals says, “they pulled me back and said the scan showed the brain activity of an 80- or 90-year-old.”

And his decline, slowly worsening over three years, would only get worse.

The art of food

Becoming a chef, Drake says, always has been about feeding people, “about seeing the empty plate and their smile.” But it wasn’t love at first sight.

“My first job, when I was 15, was at a seafood buffet,” he says. “I hated it. It was disgusting! But I learned to shuck oysters.”

He grew to love the business. Culinary school followed, then working in restaurants and jobs in Virginia, Europe, Rhode Island, South Carolina, Philadelphia. He met his future wife in a restaurant — “We’ve been sweethearts since I was 18,” she says — and the couple visited Lancaster often from their Philadelphia home.

Eventually they moved, changed jobs and had a baby, “all within three months,” Drake says, and set roots here that have grown for more than 20 years. They raised Chris, 23, an Army veteran who now lives in the Pequea area, and Alex, 19, a student at Lock Haven University.

And Drake began to build his Lancaster career. He worked with Chef Jean-Maurice Juge; as the corporate chef for the Keares Restaurant Group; and at the Belvedere.

There he created customer favorites, says Belvedere owner Dean Oberholtzer, that remain on the menu more than a decade later.

And he served as a mentor, both Oberholtzer and Gotwals say, to members of the restaurant staff who have gone on to become vital parts of Lancaster’s current food scene.

Speaking from Virginia on what Gotwals says is “a good day,” Drake says there are parts of the restaurant business he misses — and some things he doesn’t.

“I don’t miss the crazy hours, the nights, weekends, holidays,” he says. “But I miss having my hands on the food. I miss feeding people.”

And he misses the all-encompassing experience of being a chef, the guy in charge, the guy developing a menu and showing others how it’s done.

These days, he isn’t cooking much at home. “Sometimes I’ll grill outside, where it doesn’t matter if I’m making a mess,” he says.

“I think a lot of it is me,” Gotwals chimes in. “His reflexes aren’t there and I worry.”

Drake says he spends his days “with more free time than I know what to do with — that’s both good and bad.” Living back in the South near his family, he says, has given him more time to spend with them. He’s gone bike riding, fishing, bowling.

“He was very into history,” she says, “always reading about it. That’s just not possible anymore. He can’t enjoy a TV show. The news is too much to keep up with.”

No food or cooking shows on television, either. “It’s all about TV, not the food,” Drake says, dismissing the idea.

But memory games on the smartphone and music from the 1980s and ’90s entertain him. Movies, too: “I think we’ve watched ‘Pretty in Pink’ 30 times,” Gotwals says. “He can laugh at it. It keeps him not agitated.”

The price the Drakes have paid since Steve’s diagnosis is steep.

Steve, who cooked for celebrities and presidents, for generals in Europe during the Cold War, and who once walked through the door and was interviewed on the spot at Georges Perrier’s legendary Le Bec-Fin in Philadelphia, has lost his livelihood.

He’s dealt with social isolation since even before his diagnosis, when problems were obvious but a cause wasn’t.

Mounting bills have cost the couple their home, and since July they have been living temporarily with family in Virginia.

“We’ve lost everything,” Gotwals says. “We couldn’t pay medical bills and (expenses for) a home in Lancaster.”

“I don’t miss the crazy hours, the nights, weekends, holidays. But I miss having my hands on the food. I miss feeding people.”

There are bad days. There still are days of deep denial for Drake, his father, Carl, wrote in an email. “The past eight months have been bad,” Gotwals says, “and the past three months have been really bad.”

It can be a struggle to find medical help without insurance, and disability has yet to kick in, Carl Drake says.

They’ve tried getting Drake into an experimental treatment program, but his young age disqualified him. His wife attended a support group for spouses of people who have dementia, “and I was the youngest by about 40 years,” she says with a rueful laugh.

Medications are expensive, Gotwals says, and at best will only slow the inevitable. Still, they keep researching all possibilities.

“It’s like a chef learning from the experts,” Drake says. “Maybe there are people out there who might see something that I can’t see.”

Even so, he says, consulting a note he wrote so he wouldn’t forget to say it, “Alzheimer’s sucks.”

It does, Gotwals readily agrees.

“He has been this incredibly capable provider for his family,” she says, “shelves of awards, and on and on and on … and he’s a wonderful man, I’m so proud of him.”

Every once in while, “the fog lifts,” she says, like during a recent visit with a cousin. “The ‘old Steve’ was there,” she says.

And the next day, that “old Steve” was gone again.

“We miss our kids, we miss our house,” Gotwals says. And it’s exhausting and frustrating to be a spouse’s main caretaker. “It’s part of a dementia situation: You protect them, you feed them, they feel safe, and so they’re right there (with you) all the time.

“On a good day, you can move mountains. When it’s not a good day he’s frustrated. The mood change can be really dramatic, but your heart goes out to him.”

She still remembers when her husband went to the emergency room the first time. “He was upset, and he was asked if he knew why he was there,” she says. “And he just said, ‘I’m afraid I’m going to lose my family.’ ”

They may have lost everything else, Gotwals says, but family? They’re not going anywhere.