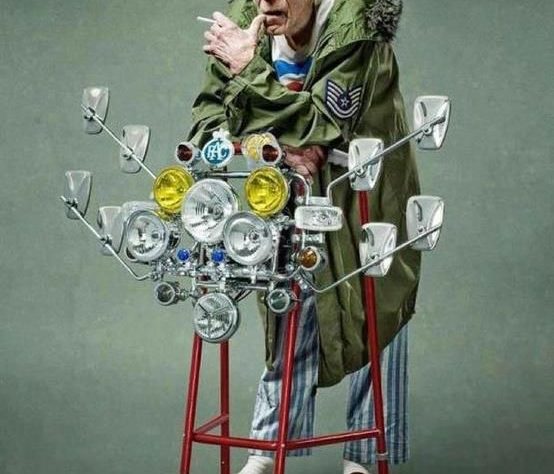 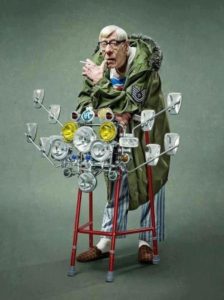 “Pimp My Zimmer”,  the scheme originating in an Essex care home in 2016 scheme has shown to reduce falls.Fewer falls, fewer hospital admissions,fewer deaths from broken hips – fantastic for such a simple idea.

Residents at care homes countywide were inspired to transform their grey and uninspiring walking aids into glamorous works of art by adorning them with bespoke knitted covers, football scarves, tinsel and even fresh flowers.
The contest was part of the council’s pioneering PROSPER project, which won a national Patient Safety Award in July for helping to reduce falls by five percent and pressure ulcers by 20 percent.
The competition was run in partnership with the North Essex Clinical Commissioning Group to coincide with the launch of their TUMBLES advice leaflet on how to prevent falls.
As she lay in bed in the early hours of the morning, Angela Donlevy, manager at Chalkney House care home in White Colne, near Halstead, wondered to herself ‘Why are all walking frames grey?’
And so the “Pimp My Zimmer” concept was born. It has since gone on to reduce falls in some care homes by up to 60 percent and prove invaluable to residents with dementia.
“As a home manager it tends to become a way of life and you are never off the job,” said Angela. “About a year ago I woke up after having a vivid dream about walking frames and I remember asking myself why they were all grey. Suddenly it occurred to me that brighter colours would be more recognisable to people with cognitive impairments such as dementia.
“They often forget their frames or take someone else’s because they all look the same, so people fall and hurt themselves.
“I hoped by involving residents in decorating their frames we could reduce injuries to our residents. Now residents love their brightly coloured and individual frames and are very proud to use them. The home has seen some remarkable results too – a 60 percent reduction in falls in the past year, which has dramatically reduced potential hospital admissions.”
Sohal Healthcare Ltd, which runs Chalkney House, has now adopted the idea in seven other homes.
Dementia sufferer Betty Gilvary, 80, was falling on a daily basis, because she didn’t recognise her walking frame or understand why she needed it.
So together with staff she spent hours decorating it with pink and blue foam bumpers, floral wallpaper and her name to help her remember it was hers.
“Betty is now very proud and possessive of her walking frame, and doesn’t let anyone else near it,” said Angela. “But most importantly she is using it and her falls have reduced dramatically.”
Olive Fenner, 81, a former grocery worker from Castle Hedingham, decorated her frame with a green and yellow theme, artificial flowers and her name.
“People were always trying to pinch my frame because they’re just grey and all look the same,” she laughed.
“But now they’re decorated you know which one is yours and they’re easier to find.”
To celebrate the launch of the Pimp My Zimmer campaign, residents at care homes countywide were invited to decorate their frames for a competition.
Marjorie Bush, 94, who lives at the Mamora home in Clacton, was crowned the champion for her elaborate knitted zimmer frame cover.
Marjorie, a former Norfolk farmer’s wife and mother-of-two, has been knitting since the age of seven and still knits scarves for the local hospital.
“I did all the knitting myself but one of the staff helped sew it all up for me,” she said.
“I’m very proud of how it looks and I enjoyed doing it. I can’t walk much anymore, but the frame helps me get to the toilet and everyone knows it’s mine.”
Cllr Dick Madden, the Cabinet member for Adults and Children, said: “The Prosper project has already made such a difference to the lives of people living in care homes and earlier this year received national recognition for helping to change care home culture and improve patient safety.
“Concepts like Pimp My Zimmer are a testament to the dedication and enthusiasm of care staff and home managers in Essex. They are constantly looking for new ways to improve residents’ lives. The fact that this initiative has reduced falls by 60% at Chalkney House is a phenomenal result that we can be very proud of.”
Share this...