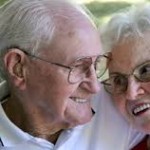 With the Queen having just turned 90 did you know …. that

the number of pensioners has doubled in the 6$ years the Queen took the throne and 44 times as many people reach 100.

Figures from the Department for Work and Pensions also showed people, on average, are living nearly a decade longer.

The Queen has sent about 110,000 telegrams and messages to centenarians during her reign.

Pensions minister Steve Webb said ” In the past 60 years we have seen man land on the moon, the fall of the Berlin Wall and the rise of the internet and digital technology. Pensioners now make up 20% of the population and make a huge contribution to society.”