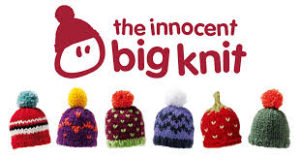 The Big Knit, how have I missed writing about this for so long, especially as I have been sending out room thermometers on behalf of Age UK for four years? Keeping elderly people warm and well in the cold prevents needless deaths is something I am passionate about.

Little hats and big hearts. I started following the monumental success of innocent from their start on Dragon’s Den way back in 1999. These three students, simply tested the popularity of their fruity endeavors on festival goers one Summer. They had two black rubbish bins, one for the people that loved the offerings and one for those who didn’t. At the end of the trial the “loved” it bin was full. The business grew and they formed a “foundation” in order to give back to society and help charities such as Age UK.

As many as 25,000 older people’s lives are at risk because of the cold.The guys at Innocent, the smoothie people, wanted to help.

Back in 2003, they had an idea. They asked people, some older, some younger people, to knit little wooly hats. Innocent then put those hats on their smoothies, and for each one sold they made a donation of 25p to Age UK. Fun and fundraising.

The idea snowballed and so far the people of the UK have knitted an astonishing 6 million hats. Together Innocent and their knitters have raised over £1.9m and raised awareness of the great work done by charities like Age UK.

In my county of Devon kind hearted knitters managed to make a staggering 19,917 hats for the innocent bottles with one Mother and Daughter team making 2,000 of these.

The Big Knit, 2017 is now being promoted as the “biggest Big Knit” ever and Age UK has the unenviable task of putting hats on 2 million smoothie bottles to be sold by retailers in November. Age UK Devon has been given the huge target of over 39,000 – needles to the ready ladies and gentlemen, boys, and girls. I may just have to get some needles and knit one or two Caron Cares ones !!

Here is the link to the patterns which vary from beginner (Me) to expert (My Mum!) and just looking some of the gorgeous examples, it making me feel excited about November and when I can get my hands on some of them. http://www.thebigknit.co.uk/knitting-patterns.

If you know someone who would benefit from a FREE Age UK room thermometer card and Winter Wrapped Up guide, please contact me using the contact form at the top of your tscreen.