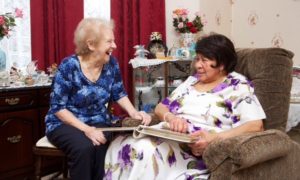 This is such an inspiring story and for once a postivie one too !

A great-grandmother once deemed too old to work is thought to be the oldest care worker in the UK.

June Shepherd, 81, is part of a new generation of older workers embarking on a career change when they would usually be thinking about putting their feet up.

Shepherd works up to four days a week for Home Instead Senior Care in Sheffield, giving personal care and companionship to older people.

She sees her age as an advantage, even looking after some clients younger than her.

“I think it’s the most rewarding way I can spend my time, particularly as many clients are isolated and often feel quite alone,” she said.

Shepherd, who has five children and 10 grandchildren, cannot imagine a time when she would want to retire from her job.

“Friends and family may think I’m a little mad wanting to carry on working such a busy schedule at my age, but I love my job and you’re never too old to try something new.”

Her working life has included stints as an auxiliary nurse, at a factory making drill parts and at the Bassett’s sweet factory on the liquorice line. She also trained as a forklift truck driver.

In her 70s, she decided she needed a change in career and looked for a job in care – a role she describes as “the most rewarding I’ve ever had”.

“I approached an agency keen to find a caregiving role, but was told I was ‘getting on a bit’ to work in the care sector. I came away thinking I was just too old to do the job,” she said.

“Then I saw an advert posted by Home Instead for care giving vacancies. Although I had nothing to lose and thought I would be a good caregiver, at the bottom of my heart I worried that my age was going to be a barrier.”

That was four years ago. Today, Shepherd has four regular clients: a woman in her 90s, a man in his 70s and two women in their 80s.

She believes her age is a “definite advantage” as she has so many things in common with the people for whom she cares. “I know the games they used to enjoy playing and the films they loved watching. I know how to help them look after their house and I can reminisce about the olden days with them.

“Because I see the same people every week, I’ve built strong bonds with them and feel incredibly privileged that they trust me implicitly.”

While family and friends may wonder whether she will slow down soon, Shepherd admitted she does not feel ready just yet.

“Some people ask me, ‘When are you going to retire?’, and although I know I will have to one day, I have no intention of stopping anytime soon. After all, I’m not 80 years old, I’m 80 years young.”