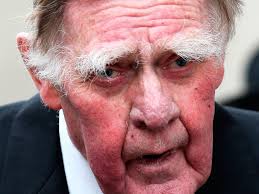 Have you ever wondered why do men’s eyebrows get bushy with age ?

I have seen the bushiest eyebrows on a gentleman today which prompted me to investigate why they grow so much when other bodily hair is declining.

Our eyebrows are important. Not only do they add so much to our facial appearance and expressions but also  help to keep sweat out of our eyes.

Changes in eyebrows as we age tend to differ for women and men. For women, eyebrows may have stopped growing years ago but in men as they get older it is very common to find their eyebrows have suddenly taken on a new lease of life and grown wild, bushy and out of control !

For men, again the change in eyebrows is due to hormonal changes. For many their levels of testosterone remain at a good level or even continue to increase up to the age of around 70 and this can encourage vigorous hair growth particularly in areas that were perhaps not as robust in younger years – areas such as the nose, ears and eyebrows.

Dihydrotestosterone (DHT)is a biologically active metabolite of the hormone testosterone. It is formed primarily in the prostate gland, testes, hair follicles, and adrenal glands and belongs to the class of compounds called androgens. This class is also commonly called androgenic hormones or testoids.

They are are part of the biology of gender by stimulating and controlling the development and maintenance of masculine characteristics. DHT is 3 times more potent than testosterone and produced by males and is responsible for the formation of male sex-specific characteristics. It is an important contributor to other characteristics generally attributed to males, including facial and body hair growth, and deepening of the voice. DHT is the primary contributing factor in male-pattern baldness.

There are now clinics where men can have their eyebrows professionally trimmed and shaped, and even dyed. There are also special men’s eyebrow razors available and of course men can simply pluck their eyebrows into a better more manageable shape. Long coarse hairs are easy to trim with special scissors or pluck out completely.