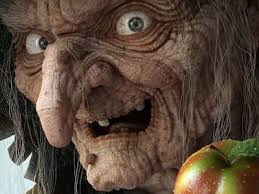 This reminded me of the day one of my sons said “I don’t want to see Nanny, she scares me”. I was shocked and a little upset by this as Nanny had always spoilt the boys rotten and was always pleased to see them.I should say hear from them as sadly she was blind an unable to see them.

Hearing this child recently starting me questioning the issue “why are some children fearful of the elderly?” and I have come to this conclusion.

Children’s views concerning older people are greatly influenced by the books, stories and verse that they are exposed to at an early age. A good example is a verse from a traditional folk song – “There was an old woman who swallowed a fly. I don’t  why she swallowed the fly. Perhaps she’ll die.”

Armed with such verse, beloved as it is for its fun and nonsense, and with the portrayals of wickedness and wretchedness of older people in some Grimm or Anderson fairy tales, is it any wonder that the elderly are viewed as silly, inconsequential, and utterly disposable in some societies ?

One positive here is fewer and fewer children are being told the traditional stories and Fireman Sam,Postman Pat and Dora to mention a few have replaced them. Even with this in mind elderly people often have wrinkles and when very elderly can become quite skeletal in frame and this very different to their parents who they spend most of their time with.

What do you think? Please let me know your views.