A lovely story of the kindness and generosity of strangers and the tenacity of an individual to never give up.

On February the 27th 2013 Caron received an email  from someone called Veronicah asking for help providing a wheelchair for an elderly relative.

Sensing the request was not from the UK she replied asking for more details. Caron discovered it had come from the remote village of Mbooni, Kenya

Veronicah is 47 and lives in Mbooni, not only does she help look after the elderly in the village she also looks after some of the children many of whom have lost  their fathers. Many of the children don’t attend school and some don’t have enough food.

Veronicah, a widow has brought up her two children alone after her husband was killed in a road accident. This is a very caring and compassionate woman and Caron was determined to help her. 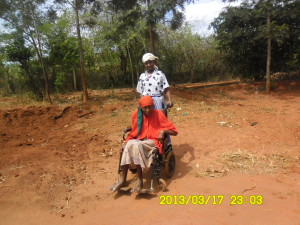 Most  busy people would have decided this was an impossible challenge, however Caron became determined to meet it. 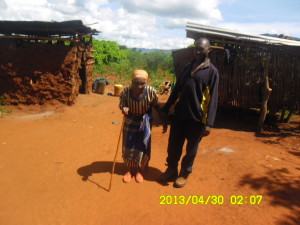 Rachel ( Above and below) is 86 a fantastic age for an African woman.

Caron contacted EVERY organisation she could think to help with this request, Red Cross, UN, World Health Organisation, Rotary Club, The Buddist Temple of Nairobi, the Wheelchair Association, Richard Brandson, the Foreign Consulate for Nairobi to name just a few.

For a long time she had few responses and no offer of help. 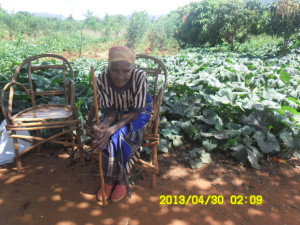 Caron finally had a response from the Orthopaedic services manager for the Nairobi branch of the Association for the Physically disabled  of Kenya. They very kindly offered to donate a wheelchair the only difficulty was they insisted that the recipient had to travel to be fitted for it on two occasions. This would involve a round trip of 260 km each time and with little transport apart from the Matu ( local bus). This was impossible for an elderly and infirm woman. 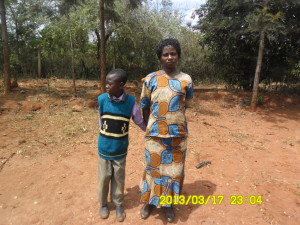 Feeling dejected Caron emailed Veronicah . They were delighted to have had the offer but it seemed that it was impossible to take it due to logistics. Caron told her not to give up, some how she would resolve this.

She thought laterally and had the brain wave that the easiest form of transport would be ….Helicopter !

Caron emailed all the helicopter charter companies in East Africa and had one reply.

Richard Leach from Hybrid Solutions emailed her explaining  that her request would cost up to £3,000 in flying time and that it would be cheaper for them to buy a wheelchair in the UK and fly it out to Nairobi from their UK arm.

Caron was delighted at this very generous offer of help and that she would see if she could find a UK distributor to contribute a wheelchair as he was prepared to  organise and fund the air transportation.

Caron set about emailing numerous companies throughout the UK and the same day received an offer from Iain McLarty Director of Great Range Mobility, in Berwick upon Tweed, Northumberland.

Caron decided as she had the offer of transportation, to donate a second wheelchair to the elderly of Mbooni and they have arrived at Wilson Airport in Nairobi.

They are being given to Veronicah by Richard who has flown them out and will be taken to the village. 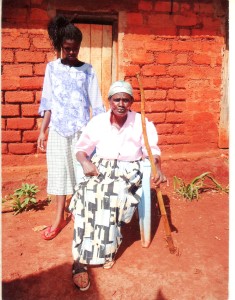 Agnes (Above) is 67 and has had a stroke and is unable to speak or walk unaided. She also has no toes.

Many thanks also to Norah Keitany the Orthopaedics manager for the Nairobi branch of the Association for the Physically disabled  of Kenya. Agnes has been able to take her wheelchair following one fitting and is said to be “happy,very happy”.

The Rotary club of Nairobi did also kindly offered funds towards transport costs. Rachel will have the one from Iain and the one Caron has donated will be going to another elderly woman in need in the village.

This is a true example of dogged determination to meet a challenge from the other side of the world for the good of an elderly people.

Caron is obviously extremely grateful to both Richard and Iain and can’t thank them enough for their kindness.

To show her gratitude to Richard for arranging the transportation he has asked her to share with you the charity he supports and would welcome any donations.

Rhino Ark raises money for the building of the one of the world’s largest eco-fences, designed to fence in Kenya’s Aberdare National Park and surrounding indigenous State forest land, which together comprise a total of 2000 km2. This area is now described as the Abedare Conservation Area (ACA). This not only provides an “ark” for endangered species, such as rhino and bongo, but preserves one of Africa’s greatest eco-systems.

If you have enjoyed Carons’ story and would like to join her in thanking Richard and Hybrid Solutions please give a donation via their Just Giving page.