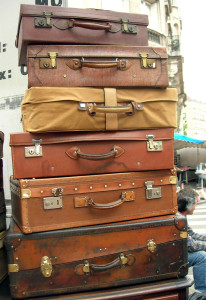 After finding it difficult to entertain people with dementia, Belgian nurse Tim Carpentier decided to develop his own games and activities tailored to his patients in a locked ward.

“What started as an urge to come up with an activity tailored to the needs of people suffering from dementia has grown into a small company renting out suitcases packed with nostalgia and board games for elders,” he wrote in an email.

Some of the projects he’s created to date include:

A “suitcase of memories” that he rents to people. It contains about 80 day-to-day objects that help elders evoke memories of their youth. Objects like a slate and stylus, an old leather satchel, a coffee grinder, an old bar of sunlight soap, … these items to mull over are accompanies by a selection of older music and films to guarantee an afternoon of joy and reminiscences.

Following the success of his invention, Tim earlier this year transformed the idea of the suitcase into a brain game called Rememborie which you can purchase using this link.

The game was developed in co-operation with Vinco Educational and is a sort of “immersion” box designed to obtain one-on-one contact with people suffering from dementia. A big asset of this game is that it can also be played with people in wheelchairs or who are bedridden.