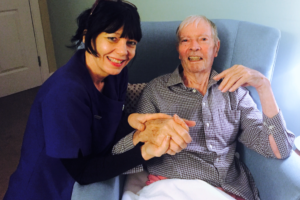 Gina Awad has recently been honoured at the Alzheimer’s Society National Dementia Friendly Awards with the accolade of “Dementia Champion of the Year 2016”.

Gina lives very near me and I am delighted to share her story. I am meeting her soon to interview her about her success and the motivation behind what she does.

Gina Awad founded and leads the Exeter Dementia Action Alliance and is aspiring to raise awareness across Exeter valuing the need for a Dementia Friendly Community that understands and respects people living with dementia and their families.

“Reflexology is a holistic complementary therapy based on the principle that there are areas and points on the feet and hands that map via the nervous system to corresponding parts of the body. When pressure is applied to these areas and points it stimulates the movement of energy along the nerve channels, and helps to restore homeostasis (balance) in the whole body (Association of Reflexologists)”.

I offer treatments in Care Homes which, I feel privileged to attend, and it enables me to connect with people on a one to one basis in their space. What is really special is being able to ‘be with’ the person where they are in those moments. They may sit in silence and enjoy relaxing, they may reminisce about times gone by or there may be moments of intensely felt emotion, which can offer catharsis.

I regularly meet families who feel a sense of guilt having promised their loved ones they would spend their twilight years living in their own home. Sadly for reasons beyond their control, this is often not the case.

A recent experience taught me the value of a quality connection. I was invited to visit a resident named Ted who has been living with Vascular dementia since 2013. I had never met Ted before and he had agreed to a reflexology treatment. I was primed and aware this could feel unexpected on the day as his memory was fading. When I arrived he was having his lunch and suggested I join him with a coffee. I sat down and as he enjoyed the remainder of his lunch he chatted away to me as if we had known each other for years. Other than a few details I knew very little about Ted’s life and yet he appeared totally at one in my presence.

Within in half an hour, having achieved a real sense of connection we strolled to his room. He settled into his comfy chair and I was able to soak his feet, gently massaging them using reflexology techniques. This exchange was not about the depth of the treatment but the essence of our connection.

What took priority was the desire for this wonderful man to sit comfortably in his chair. As he began to share stories of his younger days, his eyes sparkled with sheer contentment, which illuminated his room. There were confusing times for Ted accompanied by moments of pure clarity. What he longed for was for me to listen with intent allowing him to express exactly what he treasured.

Amidst his reflections, his eyes closed gently and tears began to slowly roll down his cheeks accompanied by a soft, sweet smile. I felt humbled, beyond belief, to witness those moments where a human being appeared to experience such a profound sense of inner peace. As he opened his eyes he quietly looked up at me with his soft smile and said: “thank you, thank you so much for listening to me and being so kind, I love going back”.

As a result of my first visit, I have since been invited twice more, each time an absolute delight. I look forward to more visits over the coming months.

I cannot emphasise enough how essential it is to be adaptable when ‘being with’ people living with dementia and meet them where they are, this example is not to be underestimated.

Considering Reflexology for people with dementia.

There are a number of stages of dementia and some clients may be uncommunicative whilst others will be articulate, lively, receptive and conscious that their cognitive faculties are beginning to decline. Dementia can take many forms but all have the potential to respond pleasingly to therapeutic touch.

The following areas and systems will be considered when providing reflexology.

I trained as a Counsellor 15 years ago but have always felt empathy and listening inherent to me, both the spoken and unspoken word. Coupled with my reflexology skills and passion for dementia I feel I have much to offer as a therapist.”

To contact Gina if you’d be interested in a visit to your family member in the Exeter area email her at   ginasfreespirit@yahoo.co.uk