It’s not my Birthday, but it might as well be as I am being given a very special present.

Today is the day that the Prime Minister of the day Teresa May awards me, little old me, with “Points of Light” Award. Never heard of it? Don’t worry nor had I until recently.

It started with me receiving an email from the department for UK  Digital, Culture, Media and Sport. I thought it was one of the bog standard Gov.UK emails and didn’t open it for 24 hours. When I did, I had a pleasant surprise. This is what it said;

“I’m getting in touch from the Government Volunteer Team based in the Department for Digital, Culture, Media & Sport in London. We compile case studies on outstanding individual volunteers to profile in Government work, with the aim of inspiring others to volunteer. Case studies are often used in Ministerial speeches, media articles, reports and occasionally we are able to put volunteers forward for awards.

I came across your work online and would really like to feature it in a case study that can be shared with government officials, including officials working on loneliness. I was wondering whether you could check the below text accurately reflects your work and if some of the stats should be updated:

Do let me know any queries or would like to discuss further – I look forward to hearing more from you,

Caron Sprake, from Exmouth, is the founder of ‘Caron Cares’, an initiative that combats loneliness and shares advice for caring for someone elderly or with dementia. Having worked with the elderly for more than 23 years, Caron decided to launch a blog in 2012 to share her knowledge of the challenges and isolation elderly people face. After the success of her blog, which now contains over 800 articles and has been named as one of the Top 10 Health Blogs in the UK, Caron was inspired to implement one of her ideas and design “Happy to Share” cards for use on tables in cafes and restaurants to encourage people to start up conversations with one another. With support from a local printing company, which produced more than 5,000 cards for free, Caron has distributed “Happy to Share” cards across Devon, as well as allowing internet users to download copies of the cards for free to print at home. She has also created and distributed over 6,000 cards for people with dementia, to help them if they get lost and to easily explain their condition. 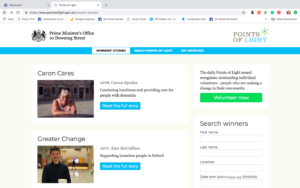