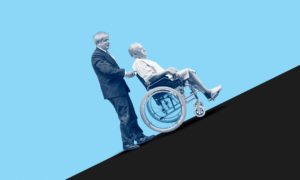 Such a huge pledge as Boris takes the keys to Number 10 is surely worthy of text space on Caron Cares.

For many years I have been watching the care sector struggle and now tumultuously plummet to its death. If anyone can sort the sector’s woes, surely that would sway any voters to continue to support them regardless of their political and Brexit persuasions?

New P.M. faces political and financial perils that have defeated his predecessors

Boris Johnson could not have been clearer in his first speech as prime minister about his intention to finally come up with a solution to one of the great policy failures of the last 20 years.

“My job is to protect you or your parents or grandparents from the fear of having to sell your home to pay for the costs of care,” he said.

“And so I am announcing now – on the steps of Downing Street – that we will fix the crisis in social care once and for all, and with a clear plan we have prepared to give every older person the dignity and security they deserve.”

This was perhaps the boldest among Johnson’s pledges on key domestic issues: fixing social care in England and Wales has proved intractable and politically perilous for both Labour and Conservative governments in recent years. But, if he is to be taken at his word, the prime minister is not deterred.

Ending the worsening scandal of the huge unmet need among older and disabled people for help with tasks such as getting up, washing, dressing and eating is also one of the most expensive of his promises to deliver. Whatever solution is proposed, the sums involved would dwarf his pledges to increase school funding (£5bn) and create 20,000 more police officers (£1bn).

Experts say that just to get back to the levels of access to help that existed in 2009-10 would cost at least £8bn a year in England alone. Local councils’ tightening of their eligibility criteria since 2010, in response to deep Whitehall cuts to their budgets, means about 1.4 million people who need help either get none or not enough.

But if Johnson decides to go further than simply returning access levels to those of 2009-10, and introduce free personal care for everyone, the annual cost would be as much as £15bn by 2020-21, as there is general agreement that free personal care would cost £7bn. However, making and maintaining both of these changes could cost as much as £29bn more a year by 2030.

The idea of free personal care is backed by unlikely political bedfellows, including Jacob Rees-Mogg and the Policy Exchange thinktank on the right and Andy Burnham, the Labour mayor of Manchester, and the IPPR thinktank on the left. However, it is still a bold move, politically as well as financially, for Johnson to make social care a priority.

As Nick Davies at the Institute for Government points out: “The painful experience of his predecessor clearly shows the political damage that can be inflicted by poorly thought through social care proposals.

“Entering the 2017 general election campaign with a huge polling lead, the poor reception to Theresa May’s social care proposal was a key reason for the loss of the Conservative government’s majority in parliament.”

That the public recoiled at proposals that would have improved the system shows that trying to reform social care can prove treacherous. Simon Bottery, a senior fellow at the King’s Fund thinktank, recalls: “The Conservatives proposed a ‘cap and floor’ model. That would have capped the amount someone might have had to pay during their lifetime for care and the floor would have raised the amount of assets that someone could have had – from £23,250 to £100,000 in cash and property. That is, more people would have been entitled to free personal care.

“These proposals created a political firestorm for the Conservatives. The public looked at them and thought they weren’t very generous and didn’t realise that they were in fact more generous than the current system. The Conservatives’ 20-point polling lead shrunk to just two points within days.”

That was largely because the plans were labelled a “dementia tax”. Critics asked: why should someone with dementia have to pay huge sums for care, potentially being forced to sell their home to foot the bill, when a cancer patient has their care provided free by the NHS?

May’s inability to answer that question convincingly, and to persuade people that her plans represented progress towards a better social care system, even after the addition of a £100,000 cap on the amount anyone would have to spend, left them dead in the water.

Bottery says reforming social care funding, and deciding on eligibility for free care and liability to pay, “is the zombie of modern policy debate, stumbling unsteadily around in circles. It has proven politically fraught since 1999, when the Labour government-appointed Sutherland commission recommended free personal care for everyone with eligible needs in the UK. Scotland brought it in but the UK parliament rejected it for England and Wales because of the cost involved. Clearly the cost is a factor in the government inaction we’ve seen over the last 20 years.”

That is also why the green paper on social care, first due in 2017, has still not been published.

Helen Buckingham, the director of strategy at the Nuffield Trust thinktank, says that while spending £7bn a year on a universal free personal care system is not cheap, it is a fraction of the NHS budget, which is due to hit £148.5bn by 2023-24. That would arguably be £7bn well-spent given that inadequate social care costs the NHS billions because poorly cared-for older people are more likely to need hospital care for a broken limb, infection or pressure sores.

So what are Johnson’s options for reform? Free personal care may appeal because of its growing cross-party support, says Harry Quilter-Pinner, a senior research fellow at the IPPR.

“Another alternative is a more generous means test and a cap on care costs as proposed in the Conservatives’ 2017 manifesto. This would guarantee that no one would face catastrophic care cost of £100,000 or more and would be marginally cheaper than free personal care at an additional £5bn per annum by 2020–21. However, it is regressive, with additional resources primarily focused on protecting the wealth of homeowners.”

“It includes contributions from pensions, taxes and payments by individuals, which are capped to ensure no one pays excessive amounts. Another option would be to simply fund it through taxes, like the NHS.”

Under May, the government was understood to be keen to bring in a system of voluntary insurance. While experts believed that would leave too many people still unable to cover care costs, Matt Hancock, the health and social care secretary, believed it was the only scheme the Treasury would back given the cost of more radical options.

However, Johnson is understood to have rejected voluntary insurance. Well-placed sources say he has told Hancock to undertake “a fundamental and much more ambitious rethink” of the proposals in the unpublished green paper, and warned Sajid Javid, the chancellor, to be prepared to put significant sums of government money behind whatever solution emerges.

There are other problems in social care beyond the increasingly unmet need, including a rise in care home closures and more than 100,000 vacancies in the workforce. But if Johnson’s intention to be bolder than before is true, then he may yet come up with an ambitious – and expensive – solution to one of the country’s longest-running challenges.

He has also pledged to help and improve the NHS. A speech in the next few days is expected to flesh out what he told MPs last week would be plans for “urgent funding for 20 hospital upgrades and winter-readiness … [and] policy proposals for drastically reducing waiting times and for GP appointments”.

The increasingly decrepit state of many hospitals has become a matter of acute concern for NHS bosses, with the bill for repairs now about £6bn. Years of ministers diverting money from the service’s capital budget into its day-to-day running costs have left it unable to even undertake repairs deemed a safety risk.

Some hospitals, such as St Mary’s in London, are so archaic they probably need to be demolished and rebuilt to provide facilities fit to house the world-class care outlined in the NHS long-term plan.

Reducing waiting-times for NHS treatment – for emergency, GP and cancer care and non-urgent operations – is a political imperative as public irritation continues to grow. However it will not be easy as the main problem is chronic staff shortages, the solution to which, experts say, requires more than money.