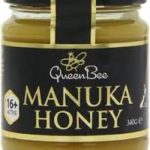 Disclaimer: Always seek medical advice in the first instance and do not use the honey as an alternative.

One of my home help gentleman was seeing his Doctor about another matter when a referral was suggested to Dermatology for the skin cancer on his head and lip. The damage done by the sun many years ago has resulted in shallow open wounds in these areas.

This was being  treated with a prescription product called SOLARAZE® (diclofenac sodium)  which had caused his scalp to become very dry,flaky and incredibly itchy. He was subsequently moisturising with diprobase cream to counteract this.

He has used Manuka Honey in the past and decided to try it on his ulcerated sores on his head and as importantly on his lip which obviously he had been unable to use the Solaraze gel on .

He subsequently cancelled his appointment at the Dermatology department and his skin is continually repairing. I would highly recommend anyone tries applying Manuka Honey to hard to heal wounds where conventional treatment is not effective. It has no side effects apart from being incredibly sticky  and I have to admit I have nick-named my client the Honey Monster.