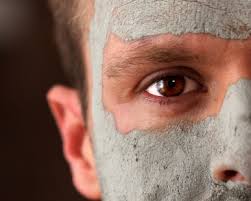 I am very aware that as a female writer very few of my articles focus solely on older men and their changing needs.

The world market for men’s grooming products is projected to exceed $33.2 billion by the end of this year. Primarily driven by a rapid rise of metrosexual male; the definition of which is “All about him and what it means to be him”, more innovative and appealing products combined with a growing middle class population, increased Internet connectivity means men are taking more and more of an interest in their appearance.

The biggest difference between male and female skin is due to the male sex hormones known collectively as androgens. Androgens play an active role in male characteristics and reproductive behaviour.

Although there is variability, adult males produce about 10 times as much testosterone as women. Testosterone exerts its effects by acting on androgen receptors found throughout the body.

Beginning with middle age, testosterone levels steadily decline every year and may be accountable for the changes in men’s skin and hair during a man’s later years.

Direct exposure to midday sunlight, especially for the fair skinned, can lead to cumulative skin damage. Since male skin is generally thicker and oilier, it requires daily cleaning and pampering.