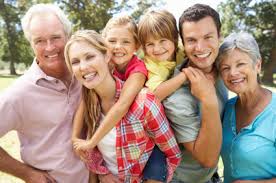 Inter-generational Families forced to live together

A new study shows that inter-generational living is increasing as families are forced to live together, partly as a result of the recession.

Expensive care costs and an ageing population mean that more elderly relatives are living with their children. Meanwhile, high youth unemployment and the difficulty for first-time buyers getting onto the property market mean that younger people are taking longer to move out of the family home.

The research, conducted by Aviva, shows that 73 per cent of over 18’s have lived with their families into adulthood, equivalent to 36 million people. The biggest proportion of inter-generational living, 37 per cent, comes from children moving back to the family home for various reasons. Mostly, this is viewed as a temporary situation.

The main reason for the increase is to save money. The research shows that on average family lodgers save £225 a month by remaining in the family home. However, it costs the host family £107 a month.

The trend is helping young people and couples save money so that they can move into their own home, however, in some instances the arrangement can last for up to ten years.

The research also pinpoints the increasing prevalence of the so-called “boomerang generation”, people in their 20’s returning home after completing university but unable to get a mortgage for their first property. 18 per cent of the number of people living with a “host” family are students studying but remaining at home.

Another common reason is that an individual moves back to the family home after a relationship break-up.

17 per cent of cases involve older generations moving back into their children’s family home.

Louise Colley, head of protection sales at Aviva, said: “Almost 20 per cent of intergenerational living is due to families welcoming the older generation into their homes.

“With a rapidly ageing population, this is likely to become more common in the future and families may need to take this into consideration when purchasing and renovating their properties.”

The catalyst for the increase in inter-generational living has been dubbed the “sandwich generation”. These are the middle-aged homeowners who are helping out both younger and elderly relatives.

Unsurprisingly, common complaints include a loss of independence and various members not pulling their weight in helping with domestic chores.

However, a higher proportion of people involved in inter-generational living, 85 against 67 per cent, said there were positive benefits, including companionship and feeling that they are being looked after.

24 per cent of women said moving back home made them feel like a child, compared to just ten per cent of men.