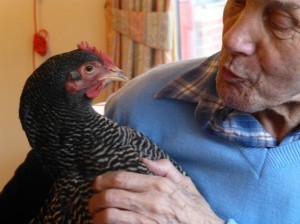 Men and Hens and Children and Community.

The Hen Men is an award winning film about a project to address loneliness in older men using hens!

Strange though this sounds, it really has been a success and I met the team at the Older People in the Media Awards where I was also a Finalist with Caron Cares.

Touched by the dramatic difference this project had made and keen to cover the story here, I saw the recent article by Pippa Kelly who had covered it on her blog.

Pippa is a beautiful writer on all things elderly and we have discussed our different styles. I believe whilst I do try and write, I am not a writer. I am a problem solver and a doer. Pippa on the other hand writes with a warmth and sensitivity that surrounds you like a soft fleecy blanket.

So, basically rather than write my own Hen Men story I am sharing Pippas’, which would always be better !. Thanks Pippa. 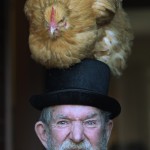 Sometimes in life, in a piece of writing or music or art, at a given moment or over a longer period, everything comes together – it all just works, often seemingly by chance.  And when it does, it’s magic, with the whole providing so much more than the sum of its parts.   This is what’s happened withHenPower, a project run by the charity Equal Arts whose tagline boasts that it “henergises older people’s lives”.

I’ll forgive the Gateshead-based team their never-ending stream of feathery puns – I’ll forgive them everything and henything in fact because what they’re doing is superb.  Through the simple activity of rearing and keeping hens, they’re transforming lives, including those touched with dementia.

It all started three years ago at a respite and assessment centre for people with dementia in Birtley called Shadon House.   Jos Forester-Melville, HenPower’s project lead, takes up the story.

“A man with dementia came into the centre when Equal Arts was working there.  He became unsettled as he was being assessed and kept repeating girls’ names.  No one knew who they were – his daughters perhaps?  It turned out that they were the names of his chickens”.

The manager of Shadon House asked Equal Arts’ director Douglas Hunter if some chickens could be introduced into the centre and, after checking with ‘elf and safety, the charity bought six of them, together with a second-hand henhouse – all, says Douglas, “for a couple of hundred quid”.

The charity trialled the project for six months in 2011 and it took off like a Mediterranean Leghorn (or, for those not into hens, like a rocket).  In the same year, it received £167,000 National Lottery funding, enabling it to set up eight pilots in care homes and assisted-living schemes throughout the north-east.  This year it has been awarded £1million in lottery funds, and organisations throughout the UK from Poole on the south coast to the Highlands of Scotland are taking up the idea.

With hindsight – and aided by Meerkat Films’evocative Hen Men documentary and the HenPower’s regularly updated Facebook page – it’s easy to see why. 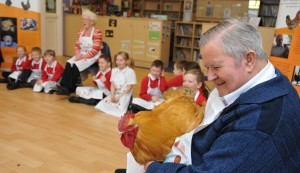 A group of older men, often not as good at socialising as their female counterparts, come together in the outdoor pursuit of rearing chickens for eggs, most of which they sell (the proceeds being used to fund the project) and some of which they allow to hatch.   They start designing imaginative coops and hen-related merchandise such as t-towels and Christmas cards.  In a stroke of genius it’s also decided that the group’s knowledge of the birds should be shared with youngsters, so the pensioners start to take their brood into schools, to great mutual effect.

They’re not big on emotion these men from up north.  But this – together with potent images of tough old hands cradling baby chicks that are no more than “cotton wool balls” to quote one of the hen men – only serves to strengthen an already powerful story that contains, as far as I can see, every last element of a global blockbuster.

Indeed, enquiries have been made from New Zealand, America and Germany as to how this simple but oh-so-effective scheme might be replicated there.

At the heart of HenPower lies a lesson for all of us involved in improving the lives of older people, and I can put it no better than Tommy Appleby, who became involved in one of the projects at Wood Green, near where he lives.

Tommy is canny enough to recognise that it’s not really (or just) about the hens.  “That’s like the trick up yer sleeve,” he says.  “They get us all talking and thinking, and the hens is just a starting point”.

His words echo those of Tim Lloyd-Yeates, founder of Alive!, a Bristol-based charity dedicated to improving the lives of older people in care through various activities.

“It’s the people in the room who have the knowledge,” Tim told me when I talked to him a few weeks ago.  “They hold the answer.  It’s easy to get caught up in the activities, but they are just tools, just a bridge to the person who has lost his or her energy or identity”.

As the wise words of hen man Tommy reveal – the great thing about these simple schemes is that they enhance the lives of everyone involved.  “We’re helping the old people”, he explains.  “Them that cannot get out and do things for themselves – they’re doing it through us.  It’s took years off me”.  Tommy, I’m sure he won’t mind me saying, is 88.

A year before he heard about the hen project Tommy’s wife, for whom he’d cared for 25 years, passed away.  “I was lost meself,” he says of that time.  “I didn’t know where to go or what to do with meself”.   He says the scheme saved his life.  “I know it sounds dramatic but it’s the truth”.

Whether it’s through engaging in Alive’s various pursuits or rearing hens, the them and us – the institutional labels of carer and service user (is there any phrase more likely to depress and dehumanise someone than service user?) – are blown away as the sense of shared purpose, verbal and non-verbal exchanges and straightforward human connection take over.

HenPower’s Facebook entry of 4 November gives a flavour of the magic at work.  Jos Forester-Melville, who writes the blog, has a way with words and her Geordie accent rings through her account of Barry and his mum Marie, a resident at Comfort House where the hen project is being introduced.  Do read it; by the end Marie who, to quote her son, “has dementia big time”, is having an animated conversation with Jos.

Carlene Taylor Williams tells of how, since HenPower was introduced in the dementia unit that she manages at Philips Court care home in Gateshead, levels of challenging behaviour among residents have been reduced (in some cases halved), which in turn has led to less use of antipsychotic drugs and improved staff morale. 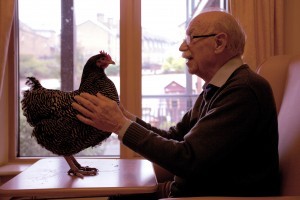 All were excellent in their own way – and necessary when research shows that by 2030, 2 million people aged over 65 won’t have relatives to care for them.Earlier this week I attended the launch of the ambitiously titled long-term care revolution in London.  Experts and innovators from health and social care, to academia, IT and finance, shared their visions for creating better services to support older people – from self-navigating tables to Miro, the robotic dog.

Yet, without wishing to get too dewy-eyed about this, I’m with revolutionary care activist, Shirley Ayres, when she says that the most powerful need we humans have is to be connected and to remain connected.  I’m sure all those involved in HenPower would agree.

There’s no doubt that technology has a big role to play in any future long-term care plans, but as Shirley (who’s been in the sector for 35 years) also said, it’s an enabler, not an end itself.

Ultimately care of each other – whether in the 12th or 21st century – comes down to people.  To Jos, Douglas and Tommy, to Marie and Barry, to Shirley – to us.  To you and me, folks, and what we choose to do and not do for the vulnerable in our society, and how we do it, and how we pay for it.

My vision of any brave new post-revolution world contains hens like Tommy’s goldtop Pam as well as dogs like Miro.  Above all, in place of service users, it has individuals connecting with and supporting each other.   How revolutionary is that?