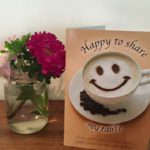 I have been so busy working on this project using social media such as Facebook and Twitter and forgot to share it here. This is the most important place and where it should have been shared in first instance as my longer term depository! Better late than never.

This project first occurred to me last year when I noticed in local cafes and pubs that people were sitting one per table. This appeared to be a shame when the media had been highlighting how dangerous loneliness is and also not good for business.

I decided it was time to try to get people talking to each other and not needing to phone helplines such as the marvelous ” Silverline” established by life-long issue challenger Esther Ranzen. My plan was to get people chatting in public places hopefully leading to friendships.

I designed a very basic card with a smiley face on the front and details of the project inside and managed to secure funding from Recovery Devon who are a community of people supporting mental health recovery. They believe that with the right help people can and do recover from mental health issues and live meaningful and purposeful lives.

They very kindly gave me £345 to fund the design, print and distribution of the cards. Then they decided they liked the idea so much they gave me an additional £100. I have had 5,000 cards printed FREE of charge by Ink Press in Exmouth because they also loved the idea of the project and I simply had to pay for the laminating to make them both durable and wipe proof.

local businesses have been amazingly supportive helping me to distribute them to the general public and also by displaying them on tables in their establishments. Thank you to them all.

Feed back has been really positive and I have also sent cards all over the UK and they have even travelled as far as France. Time will tell whether they will really make a difference but it is a simply way to raise awareness, a smile and a conversation. xx