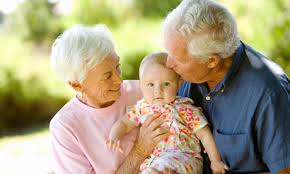 Did you know the 6th of October is National Grandparents day ? What do you think of the idea and do your grandchildren know about it ?

This holiday celebrated in America since 1978 and officially recognized in a number of countries on various days of the year, either as one holiday or sometimes as a separate Grandmothers’ Day and Grandfathers’ Day.

Grandparents day was introduced to the UK in 1990 by the charity Age Concern and has been celebrated on the first Sunday in October since 2008.

Grand parents day is not widely advertised and is not as successful  commercially Mothers Day or Fathers Day.

I would love to hear your thoughts on this one.

Do you think it is necessary to have one day for your grandchildren to remember you?

Are you even in touch with them ?