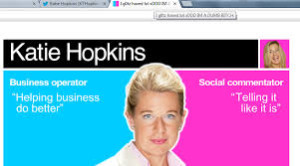 Old news now, but what Katie “said” not did .

Katie Hopkins the former Apprentice contestant has made a career and name for herself as a self confessed critic of everyone … and that is putting it mildly.

Her recent article in the Sun newspaper however sparked a storm of controversy when amongst other comments she referred to the elderly as “annoying” and continued to add that she felt it wasn’t worth taking the time to visit elderly relatives with dementia!

To those of us care passionately about good care and treatment of our elderly  this has been like a red flag to a bull.

I left the following comment on the Closer page relating to this.

“Why is it that we are all going wild when it comes to a so called celebrity making outspoken and thoughtless comments about the elderly when the truth of the matter is that some people care more for their pets than they do the elderly.

I am currently trying to help someone whose elderly relative was systematically failed by the care system that should have kept her safe and no-one wants to know. Plus week in, week out there are reports of the elderly being abused at worst or neglected at best. When will things change ?