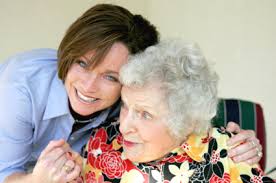 Will eldercare become as common as childcare ?

A number of major employers are now offering “eldercare” help looking after elderly relatives. Could this be as common place  as providing childcare in the future?

Deborah’s 82-year-old mother, Pauline Cuthbert fell and broke her nose. The accident shook Pauline’s confidence, with her not leaving her house in Leigh-on-Sea, Essex, for fear of falling again.

Deborah, who lived a two-hour drive away, would have to take time off work to accompany Pauline to hospital appointments. She had a back-up plan – an eldercare package offered by her employer, giving up to 20 days assistance a year from a care worker who could take her mother to her clinic.

She may have been fortunate to have access to this support, but a number of firms have realised that they don’t get the best out of their people if they are worried about family pressures outside work. The employees most likely to find themselves caring for elderly loved ones are also most often the most experienced and therefore valued.

Those who have put in place eldercare services for employees include Sainsbury’s, British Gas, and NHS England. About 70 organisations have joined the group Employers for Carers, which points out that about one in seven employees will have caring responsibilities outside work.

They may be a minority of employers, but they are following a similar rationale to the view that companies need to offer childcare assistance to encourage new mothers back into the workplace and retain talent, rather than go to the trouble and expense of recruiting and training new people.

On average most people live until 80, more than 10 years longer than during the 1960s coupled with people are working later in life, making them more likely to have to combine working with caring for a relative.

Research by the polling company YouGov found there are 2.4 million “sandwich carers” in the UK, caught between caring for children and elderly parents at the same time as working. Another survey for Carers UK found that 42% of this sandwich generation were either struggling to cope or at breaking point.

Deborah learned this for herself. While Pauline was recuperating, Deborah also found herself looking after her 25-year-old daughter who was recovering from an operation. “I suddenly realised what the sandwich generation was all about at that point,” she says.