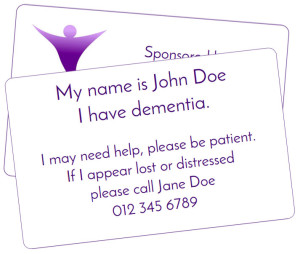 The first time I noticed something out of character with my mother Lily was around 1983 when she had cut all her beloved leafy and flowering house plants down to bare twigs. “They needed pruning” she said. In the following couple of years there would be further uncharacteristic episodes, confrontations with and accusations made to family and friends. Unfortunately, I didn’t get it! I was too late to rescue all the important personal papers and documents that she had cleared out in her blissful ignorance!

It was not until 1985 when I realised something was seriously very wrong. I had visited Lily every day, until for three days I went away on a course. Upon my return she asked me why I had not come in but had just knocked on the kitchen window and waved. She was living in a first floor flat!

She stopped using her car – she said she couldn’t remember how to drive. She would go into the post office to collect her pension and then go back the next day. I was getting reports from local shopkeepers and her neighbours about her odd behaviour.

I had to try to explain what the problem was. Alzheimers was not so widely known about in those days. I am not sure even if people had been made aware of her illness they would have even known what it was back then.

However nowadays, with early diagnosis and global awareness, I strongly believe that if a sufferer is willing to be visibly identifiable, much more understanding could be given as they go about their daily lives. We all are happy to help a visually impaired person if we see a white stick, or a physically handicapped person. Unfortunately there are no visible symptoms to identify dementia – just unreasonable behaviour – and this hinders the perception and understanding of this awful affliction.

The card is FREE and fully editable on line and will soon be available in many languages. It is also available blank . Please help spread the word and awareness.