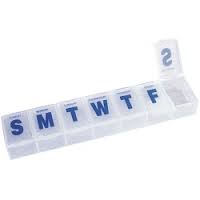 How do you help someone with sight loss manage medication ?

This is a case study of one of the gentlemen I look after as a home-help.

Ben is 89 and has severe sight loss due to Macular degeneration. Living alone since the loss of his wife of over 50 years to dementia, Ben has also just had to give up driving his mobility scooter.

Little by little his his independence is reduced.

I have been checking his Warfarin charts and his chemo tablet doses and placing the correct tablets in the type of dispenser box  shown above. This has worked quite well for a while but once in a while it goes wrong BIG TIME !

All hell let loose yesterday as Ben decided his tablets were incorrect and he took his frustration out on a visitor who had to ring me and tell me I was making mistakes. Whilst I would not testify in a court of Law, I was 99.9 % sure his tablets were correct when I left on Thursday. To make things simpler, I had only filled the box until Tuesday the next week to avoid confusion.

Anyway, something went wrong and he swore his tablets were incorrect !

I decided the best thing to do would be to involve him in the dispensing. Today we both sat down and counted the tablets and put them in the correct compartments. This way I was also removing some of the onus from myself and handing him back some responsibility, which I liked for his sake. This is not to say he won’t muddle the tablets, but he does know they were correct when they went in!