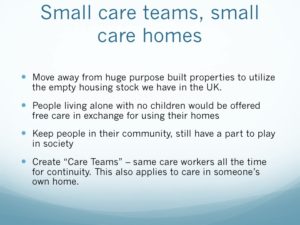 Care Teams are the way forward

The image above is one of my “Blue Sky Thinking” presentation slides, where I champion small care teams.

I wanted to share this incredibly interesting article with you. I have said for a long time that small care teams are the way forward in social care and the Dutch have a proven model.

The Dutch may be renowned for tulips and Edam cheese, but these days it’s their innovative district nursing and homecare model that is exciting global interest. Buurtzorg, which translates as “neighbourhood care”, is seen by its many enthusiasts as a key part of the solution to challenges facing healthcare systems across the world.

From Aberdeen to Shanghai, the Buurtzorg approach is being seized on by policy-makers as a means of enabling people with care needs to live independently with much less formal support. Potential cost savings of up to 40% have been calculated.

At the same time, the model is said to be hugely popular with the nursing teams who run it because it frees them from management control and unleashes their entrepreneurial creativity. And it is very simple.

Buurtzorg was founded 10 years ago by a 56-year-old nurse, Jos de Blok, and started with an initial team of four. The system that evolved deploys teams of up to 12 nurses, who are responsible for between 40 and 60 people within a particular area. There are now around 900 teams in the Netherlands, supported by no more than 50 administrators and 20 trainers.

The principle underpinning the model is that the nurse acts as a “health coach” for the individual and their family, emphasising preventive health measures but also delivering necessary care themselves or calling on others to do so. The golden rule is that nurses must spend 61% of their time in direct contact with the people they support.

An evaluation by consultancy KPMG in 2012 found that although the care might be costlier per hour than under a traditional approach, it was of higher quality and better appreciated by those in receipt. Crucially, only half as much care was typically required.

“What I see in a lot of countries is that systems are increasingly complicated and frustrations are becoming worse and worse,” says de Blok. “I want to show that it’s easy to change.”

De Blok will be talking change at the 25th annual European Social Services Conference in Malta at the end of June, organised by the European Social Network. In some cases, he will be preaching to the converted: Buurtzorg is being trialled in the UK and Sweden, with Germany and Austria soon to follow, as well as in the US, Japan, China, Taiwan and South Korea.

But others at the conference will need convincing that the model can be transplanted into other health systems and nursing cultures as easily as he suggests.

One issue is funding: the Dutch model is tailored to payments by health insurance companies, not a state healthcare system like the NHS or means-tested social care. Another is the scrapping of hierarchies and specialisms within the nursing teams: a Buurtzorg nurse might administer wound care, but may also help someone to wash or get dressed.

A third challenge is that the model requires management to back off and allow their teams considerable latitude, with much less performance monitoring than has become the norm in, for instance, the UK. Bureaucracy is reduced to a minimum.

It’s all about creating something different from the bottom up.

“We have tried to prevent it becoming a meetings structure,” says de Blok, describing how his teams are encouraged to think freely in finding answers to people’s care needs, drawing on other professionals and volunteers. “The autonomy is better when [the teams] build their own networks to solve problems.”

The Buurtzorg approach has even been extended to what in the UK would be recognised as home help, after the organisation stepped in to rescue a failing Dutch provider two years ago. By cutting its overheads dramatically, the provider has not only been saved but has expanded by more than 60% to 4,000 employees.

It is significant, therefore, that one of the most advanced UK Buurtzorg pilots is being run by Cornerstone, a Scottish homecare charity, while others closer to the original nursing concept are developing at sites including Aberdeen, Angus, Dumfries and Galloway, and Borders.

In England, the model has been taken up by the Guy’s and St Thomas’s NHS foundation trust in south London as well as integrated health and care services in Tower Hamlets, east London, and in west Suffolk. Active interest has come from Kent and Cheshire West, among others, and 300 people recently attended the first presentation in Wales by Public World, a consultancy working with Buurtzorg.

De Blok insists he is relaxed about the model being adapted to suit local circumstances. Buurtzorg is a non-profit organisation – though it makes a surplus for reinvestment – and it does not seek to franchise the model under licence.

“I’m not interested in money,” de Blok says. “I see so many people searching for a new way of doing things in all the places I visit. It’s all about creating something different from the bottom up.”