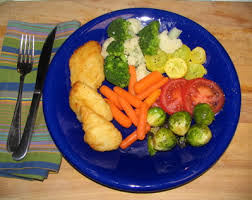 When food is served on blue plates rather than white ones older patients ate nearly a third more. It is thought this is because the blue plates make the food look more attractive.

That means for every three forkfuls eaten from a white plate, four were eaten from  a blue one.

Head of catering Ian Robinson said: ‘It has proved so successful we are switching to blue crockery right across the hospital trust.’

I also think it may also be because the food stands out well on blue plates as there are no foods that are naturally this colour. This also helps the elderly who have sight loss and the contrast is particularly important for those with dementia

Hospital malnutrition is a major problem, especially for the elderly, who occupy two in three beds. In a study by Age Concern in 2006 it was found that six in ten older patients were at risk of becoming malnourished in hospital.

Experts believe standard white or pale crockery dulls the appetite of ill people because foods such as chicken, chips, mash or pork chops are beige.

Managers  having seen that blue plates encourage appetite, believe all patients in the 455-bed hospital could benefit and intend to introduce blue plates in every ward.