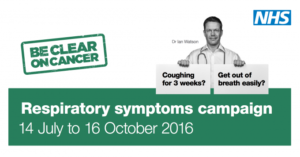 Be Clear on Cancer and other conditions

With it becoming increasingly difficult for patients to see their GP it is still vitally important for people, especially the elderly or you us as carers to be mindful of symptoms. This article is to help us all be clear on the symptoms that make indicate something more serious may be underlying.

In the majority of cases a persistent cough for over 3 weeks is really nothing to worry about but for a few people, it may be the early indicator of lung cancer or COPD (chronic obstructive pulmonary disease). We all know that early detection leads to more effective treatments and saves lives yet many elderly people still don’t like to “trouble” their doctor. It is important to make sure someone who has had a persistent cough does see their GP and doesn’t just put it down to getting older or a “smoker’s cough.”

Lung cancer is one of the most common cancers in England with around 36,000 new cases being diagnosed each year. It affects people of all ages but more so those over 50 and whilst it does present itself more in smokers around one in eight people with lung cancer, have never smoked.

The same applies to anyone who finds themselves becoming breathless doing something that usually would not have made them short of breath. This may be nothing to worry about, but it may also be the sign of lung or heart disease. Breathlessness can also be an indicator of anxiety or anaemia. Either way, please urge someone you care for to be examined by their GP.

The good news is that most of the conditions that do cause a shortness of breath are easily treated. That said, coronary heart disease affects 1.8 million people in England caused by smoking, high blood pressure, high cholesterol. The sooner it is diagnosed the sooner a heart attack can be prevented.

The NHS ran a campaign in 2016 which finished in October and I felt it was important to continue to raise awareness of the symptoms of lung cancer and heart disease to prevent unnecessary deaths. Early detection also makes the job of a strapped NHS easier too as it means less invasive and also less expensive treatment and may avoid the need for hospitalisation.

Other symptoms to keep an eye open for include