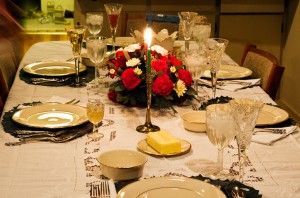 Do you know an elderly person not having a home made Christmas lunch ?

With less than a month to the big day and the meal of the year, please spare a thought for those who will be alone and eating a ready-meal.

For the last few years I have ensured all my clients are having a Christmas Dinner and if not I cook and deliver them one on Christmas Eve. The delight when I offer a home cooked Christmas dinner to people who would not have one is reward enough, I deliver it with festive wishes and free of charge.

We would like to think of malnutrition as a problem isolated to under-developed nations and not one we face in Britain however this shocking report indicates differently. I do have to agree with the causes as I see it myself on a daily basis and do offer at times to cook for those I feel are really not eating well.

It is estimated that nearly 1 million older people in England are at risk of malnutrition.

The “State of Care Report from The Care Quality Commission underlined how big the problem of malnutrition has become for older people in both hospitals and care homes. I have previously written that my blind mother-in-law was left with two broken collar bones to feed herself (in our local district hospital) which she was totally unable to do.

15% of the hospitals, 20% of nursing homes and 11% of residential care homes in the report failed to meet the dignity and nutritional needs of older people.

Why older people are more at risk from malnutrition

The problems affect many people, but older people are more at risk due to factors affecting many in later life, including physiological changes, poor appetite, low income, practical difficulties in shopping and cooking, poorer mental and oral health, social isolation and  acute or chronic illness.

Assumptions that older people are thinner can mask the issue

Social and professional perceptions that older people are typically thinner can mask the issue and mean it is less likely to be picked up.

Malnutrition also has wider repercussions than the individual concerned. In 2010 BAPEN reported that public expenditure on malnutrition in the UK is estimated at over £13 billion. Most of this expenditure comes out of NHS budget.

Need for increased awareness of symptoms of malnutrition among health professionals

The Malnutrition Task Force has been set up to help prevent older people being caught in a spiral of decline linked to malnutrition, as medical professionals often fail to spot the warning signs.

Dianne Jeffrey, Age UK Chairman and Chair of the independent Malnutrition Task Force said, ‘Malnutrition amongst older people is all too often a hidden problem of which the consequences can be very serious. In the worst cases older people become ill and end up being admitted to hospital or they take much longer to recover from illness or injury.

‘Many of these cases are preventable so it is unacceptable that there are an estimated 1 million malnourished older people living in our community. These high figures would be dramatically reduced by increased awareness of the symptoms amongst health professionals so that it doesn’t go undetected, and ensuring all older people are checked for risk on admission to hospital and treated while they are there.

‘More support is also required in the community to ensure older people get enough to eat.’

The Malnutrition Task Force welcomes the Nice Quality Standard for nutrition support in adults, which is published on Friday.

The Malnutrition Task Force would like to see a ministerial lead responsible for championing and monitoring the work, and that awareness of the problem of malnutrition be reflected and measured in all health and social care work.

The Task Force has identified an urgent need for greater professional awareness of this condition as a priority.